How many ladies have had double penetration and did they enjoy or hate it.
Asked 6 hours ago
My partner bought me a gift - after I specifically said to him: "Thank you for the idea, but I do not want this." Now he
Answered 11 hours ago
Were you pleased with the sex of your firstborn?
Answered 11 hours ago
2 homes
Asked 12 hours ago

Head lice – ain’t nobody got time for that!

And if your kids catch them, you’d better believe that you are going to waste so many precious hours dealing with the disgusting little critters as you fall down the rabbit hole of vermin eradication.

I’ve got two primary school-aged daughters and one preschooler, all with long hair. The thought of head lice fills me with panic and dread because of the absolute nightmare involved in removing the freaking things. Over the years, we’ve all cried so, so many tears dealing with them.

And when other parents don’t treat their kids, your child can become re-infested again very quickly. I remember one time, years ago, I sent one of my kids off to daycare in the morning knowing her hair had been treated the night before and was wonderfully bug-free. She came home that evening with several adult bugs roaming around her head. There’s no way those things, which were like the size of buffalo, must have “hatched from eggs that were missed during treatment” like one of the staff at the daycare centre tried to tell me. You better believe I wept as I began the extermination process all over again.

My story is far from uncommon – they drive so many parents to the point of despair as they try different ways to eradicate them, only to have them come back again with a vengeance.

If you’ve been around parenting forums on the internet or Facebook groups and pages for even a little while, you’ll know that the topic of nits and nit eradication comes up all the time. And everyone has an opinion on what does, and doesn’t work. I’ve heard just about everything, believe me.

Suggestions will always include using any number of heavy duty lice treatments available from your local pharmacy, NOT using pharmacy lice products because the lice have developed superpowers and cannot be killed by conventional means, hard core metal combs, plastic combs, tea tree oil, coconut oil, canola oil, baby oil, combing every three days with a nit comb and conditioner, mayonnaise and cling wrap, hair dye, hair straighteners, Cetaphil, Vaseline, two icy cold litres of Coca-Cola, a super dooper electronic lice comb that zaps the shizzle out of the bugs and… someone always takes it there: “Have you tried using (insert hardcore flea-killing product name here) for dogs and/or cats? I used it on my kids three years ago and have never seen another nit again!” Or words to that effect.

Yep. A product meant for animals. The sort you might know by brand names such as Advantage, Frontline or Revolution. These people claim they put a few drops on their kids’ heads and, hey presto, they are living the nit-free dream! They see the lice literally falling off their children, to their deaths, and they all live happily ever after.

Often, at this point, the forum discussion or Facebook thread will degenerate and Michael Jackson will show up with his popcorn declaring “I’m just here to read the comments”.

If you’ve reached the absolute end of your sanity with these things, this crazy idea might just sound good enough to work. I mean, if you can use it on Fido or Kitty, why can’t you use it on your kids? We’re all animals at the end of the day, right?

Stop right there! Snap out of it! Pull yourself together! DO NOT FRONTLINE YOUR KIDS!

These products are systemic pesticides. They work by making an animal’s blood-stream toxic to parasites like fleas, which feed on blood to survive.

There are warnings all over these products that declare: FOR ANIMAL USE ONLY. These products have not been approved for use on human beings! And your quest to get rid of nits might see you doing more harm than good to your kids.

In fact, a few years back, so many people were attempting this unorthodox head lice treatment, the Western Australian Department of Health was compelled to issue a warning telling parents NOT to do it:

” The Department of Health has received reports indicating that dog and cat flea treatments are being used by members of the public to treat children with head lice. In response to these reports, the Department of Health is advising parents against this practice and of the potential risk to the health of children if treated with animal flea treatments,” the statement read.

“The active ingredient in the products of concern is Fipronil. Fipronil is a phenylpyrazole insecticide and acts to block the normal functioning of the central nervous system in insects and also mammals.

The Australian Pesticides and Veterinary Medicines Authority (APVMA), the Commonwealth authority responsible for the registration of pesticide products, is reviewing Fipronil following a number of reports of adverse experiences, such as skin reactions in owners after patting pets treated with Fipronil.”

That statement was from 2008… and here we are in 2016 and I read a comment on Facebook just today from someone singing the praises of using hardcore animal flea treatments on their kids’ heads.

You might kill the lice off, but you might make your child really bloody sick in the process. Symptoms of exposure and poisoning from Fipronil can include headaches, nausea, dizziness, weakness, irritations, lethargy and convulsions.

The V-Comb is the most convenient and mess free tool to get rid of head lice for good! It is an allergen and chemical free product to safetly remove those itchy’s from your child’s hair without the risk of exposure to nasty chemicals.

‘Combing is still the recommended and most effective way of treating headlice infestation. The Licetec V-Comb takes this one step further by keeping the treatment hygienic and mess-free, all without the need for harmful allergens and chemicals. 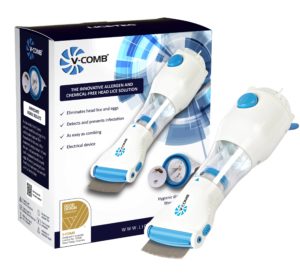 Do you know anyone who has treated human lice using animal flea products?

How To Go Bankrupt

Bankruptcy Doesn’t Need To Be A Dirty Word..