Munchausen by Proxy Syndrome is a mental condition whereby the primary caregiver for a child, usually the mother, deliberately makes her child sick or fakes symptoms to gain the sympathy of peers, family and medical professionals.

There is currently no exact science to determine what causes this condition, but it is believed that in most cases, the abuser was abused themselves as children or were ill for long periods of time during their youth.

To date, this is considered to be one of the worst cases of Munchausen by proxy ever recorded.

Marybeth Tinning, born Marybeth Roe was born on September 11th, 1942 in Duanesberg, New York. She grew up in an average working class family and was an average student at the local high school. There has been a lot of suggestion that her father, Alton Roe may have been abusive, beating her and locking her away, but nothing was ever investigated or proven. Marybeth always had a quiet, sullen demeanour; she was never social or chatty and has been described as strange by lots of people who knew her.

After graduating high school Marybeth worked a series of unskilled jobs before finally becoming a nurse’s aide and in 1963 she met Joe Tinning through friends and the couple married in spring 1965. Their first two children Barbara, born 31st May 1967 and Joseph, born 10th January 1970 were both healthy and happy. In October 1971, when Marybeth was pregnant with their third child, her father died suddenly of a heart attack.

The couple’s third child Jennifer, born 26th December 1971 was very sickly at birth and was kept in hospital under observation, she died at only 8 days old from acute meningitis. At the funeral and wake it was noted by many people how happy Marybeth seemed and how much she enjoyed the attention and sympathy from everyone. This is considered the tipping point for Marybeth, where she became the star of the show, playing the bereaved mother at her child’s funeral….. and she loved it. 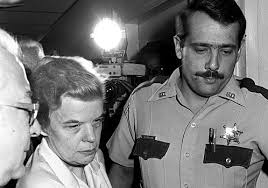 Just 17 days after Jennifer died, Marybeth rushed into the Emergency Room with her son Joseph, claiming he had experienced a seizure. The doctors revived and observed him and, finding nothing wrong, sent him home. Marybeth brought him back a few hours later, claiming she had found him after a nap, tangled in the sheets, his skin blue. He was dead. The death was listed as unknown and no autopsy was performed.

Barely 6 weeks later, Marybeth was back in Emergency with Barbara Ann who was suffering from convulsions. Doctors treated her and advised that she stay overnight, but Marybeth refused and took her home. Hours later she was back and Barbara was unconscious, she died soon after. The police were notified but an autopsy showed no obvious cause for concern so the death was attributed to cardiac arrest and no investigation was done.

At each of the children’s funerals, Marybeth seemed happy and chatty and enjoyed the attention from all the mourners. Many of the people present commented that she never appeared sad over losing a child, suspicions had already started to stir but nothing indicated foul play and there was even suggestion of a genetic issue, a “death gene” some doctors called it as an explanation for the children’s deaths.

There were no Tinning children left, until Marybeth became pregnant again the following year and Timothy was born healthy but small on 21st November, 1973. He went home with his mum two days after birth but was back December 10th, just 3 weeks later, he was dead. Marybeth claimed to have found him lifeless in his crib, with blue skin, the death was attributed to SIDS and no autopsy or investigation was done.

In 1974, Marybeth and Joe went through what was described by them as a “high stress period” in their marriage. During this time Joe suffered a near-fatal dose of barbiturate poisoning, brought on by Marybeth putting pills in his grape juice that she obtained from a friend with an epileptic child.

Two years later on March 30th, 1975 Marybeth gave birth to Nathan, another beautiful, healthy little boy. On September 2nd, only 5 months old, Marybeth brought him into Emergency – she said he had stopped breathing while they were out in the car, he was dead upon arrival at the hospital and again SIDS was blamed.

After nearly 3 years of no children in the Tinning household, Marybeth and Joe decided to foster a baby boy called Michael. They began adoption proceedings in June 1978, only to find out shortly after that Marybeth was pregnant again and Mary Francis was born 29th October, 1978. In January 1979, Mary Francis was rushed to emergency with seizures but was treated and sent home. A month later she was back and died shortly after arriving at hospital. Marybeth again claimed to have found her daughter lifeless in the cot. When an autopsy failed to find a reason for the babies death it was again attributed to SIDS.

November 19th 1979 saw the birth of another healthy Tinning baby, Jonathan, but on March 21st he was rushed back to hospital unconscious. This time specialists and numerous doctors inspected, tested and treated Jonathan, but couldn’t find anything wrong so he was sent home, only to be back 3 days later, already dead.

The Tinnings were down to one again, foster child Michael. On March 2nd 1981, Marybeth carried him into her doctors office and upon examination he was found to already be dead. There was a discussion of why she didn’t take him to emergency but instead waited until the doctors office opened, even though Michael was sick and unresponsive much earlier in the day. He was found in an autopsy to have pneumonia, but definitely not severe enough to kill him, however the doctor still attributed the death to acute pneumonia and no one was held responsible.

Marybeth became pregnant one last time and on August 22nd 1985, Tami Lynne was born. She was monitored very carefully by doctors for the first 4 months of her life and found to be in perfect health. On December 20th Tami Lynne was rushed to emergency by paramedics called to the house, she showed no signs of life and was pronounced dead at the hospital. There were no obvious reasons for her death and Marybeth claimed to have found her tangled in blankets, blue skinned and not breathing. But people could no longer contain their suspicions and doctors, nurses, friends and neighbours began going to police about what they thought had really happened to the Tinning children.