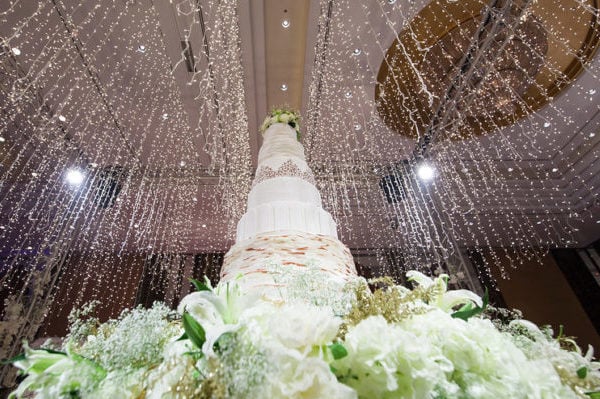 Every wedding celebration is not complete without it, and for couples who want to wow their guests, it’s always the taller, the grander — what else but the wedding cake!

Some couples (even celebrities) want it big, ten-tiered if possible, while others want it plain and simple.

If you’re planning your wedding and have yet to decide on what wedding cake you want as your big day’s centrepiece, here are some celebrity wedding cakes that might just inspire you.

This eight-tiered wedding cake was on display at the Buckingham Palace. Prince William and Duchess Kate actually had two different wedding cakes. The one below is the traditional multi-layered fruit cake version which was done by Fiona Cairns, the official royal baker. It consisted of 900 sugar paste flowers and had the couple’s initials engraved on each layer. The other was a chocolate wedding cake! Three of the wedding cake tiers were removed for the christening of William and Kate’s children, so you never know, there may be a future Prince or Princess added to the current family one day! The cake reportedly cost $120,000.

Queen Elizabeth II and The Duke of Edinburgh were married in 1947. Their amazing multi-tiered wedding cake was made by famous Scottish biscuit company, McVite and Price Ltd. It was a traditional fruit cake laced with alcohol. The cake stood a huge 9 feet tall and had four tiers, it fed a whopping 2000 guests at the nuptials. The ingredients for the magnificent cake were given as a wedding present by Australian Girl Guides. The cake was cut with Prince Phillip’s official sword. As a gesture of thanks, the Queen sent one of the layers back to Australia. In 2015, a slice of this wedding cake (that was amazingly still edible and wrapped in the original parchment paper) was auctioned for $1000.

The cake had pictures on the sides which showed scenes from Princess Elizabeth’s life and Prince Phillip’s family crest.

Princess Anne and Captain Mark Phillips were married in November 1973 at Westminster Abbey. The cake was made by the Army Catering Corps. The tiers were made of solid silver supports. The cake stood 5 feet, six inches tall which was the exact height of Princess Anne.

Prince Rainier of Monaco and film star Grace Kelly were married on April 19, 1956. Their cake was a six-tiered masterpiece with the cake cut by Prince Rainier’s official sword.

The five-layer extravagant cake made for Prince Albert II of Monaco and Charlene Wittstock outshone even his parent’s wedding cake! Princess Charlene requested that the cake be covered in Proteas, in honour of her South African heritage.

Jacqueline Bouvier Kennedy and John F Kennedy were married on September 12, 1953. The wedding cake was made by a Fall River bakery. JFK had met the baker years before, and always promised him if he ever got married, he would ask him to make his wedding cake. JFK kept his word.

The amazing wedding cake for the marriage of Alyssa Milano and David Bugliari was made by Cheryl Kleinman of Brooklyn New York.

Elvis and Priscilla Presley were married at the Aladdin Hotel, Las Vegas in 1967. The six-tiered wedding cake was created by pastry chef Denis Martin at the resort. The cake was yellow sponge cake with a kirsch-flavoured Bavarian cream. All the layers were kirsch-glazed, and marzipan roses were created on every tier. Kirsch is a fruit-flavoured brandy made from sour morello cherries. The cake reportedly cost $3,200 back in 1967!

Chrissy Teigen was fussy when it came to choosing her wedding cake. Not a big sweet eater, the Sports Illustrated Model opted instead for a four-tiered carrot cake!

Yes I know, they are well and truly done and dusted, but Mariah Carey’s marriage to Nick Cannon did give some surprises, that being said, she didn’t have an enormous wedding cake. The five-tiered cake was made by Margaret Braun who is world-renowned for making the most delicious wedding cakes in the world. The cake was chocolate mud cake layered with toffee ganache.

Another wedding that is well and truly down the drain is Christina Aguliera and Jordan Bratman, but the couple’s wedding cake was something special. The couple married in 2005 with the wedding costing an estimated $2 million. With five tiers of white chocolate smothered in hot pink marzipan roses, the cake was taller than the bride.

Sigh… Another one bites the dust. The couple married in 2006 in the 15th Century Odescalchi Castle in Italy. But this is perhaps my very favourite celebrity wedding cake. The five-tiered white chocolate mousse wedding cake was smothered in marzipan roses. Each tier was decorated with white pearl detailing.

David Hasselhoff and Catherine Hickland were married on March 24, 1984 (and divorced in 1989). The cake was a traditional fruit cake with six tiers!

The two best looking people in the entire world were married in Palm Beach, Florida. The amazing cake was a gorgeous five-layer masterpiece designed and made by Sylvia Weinstock. The cake featured a ‘quilted’ design and was topped with a fresh white flower arrangement. Sylvia is known as the ‘Queen of Cakes’ and has been baking for the rich and famous for 35 years.

Which celebrity wedding cake wowed you? 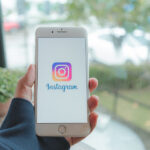 How To Start Your Stay-At-Home… 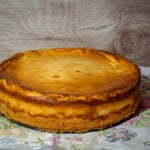