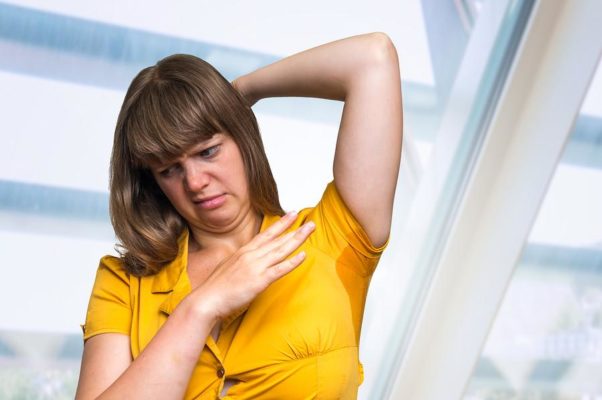 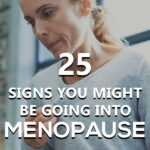 Menopause is a natural part of life, but that doesn’t make it easy to deal with.

The changes in a woman’s body can be challenging, and it pays to be prepared and well-educated on them.

Most people are familiar with at least some of the signs of actually experiencing menopause, but did you know that there are symptoms that show up before that, which can indicate that the menopausal time of your life has begun?

This time is called menopause transition or perimenopause, and it starts as early as a few years before your menopause begins. Generally, this occurs in women in their 40s, but it can start around the 30s or even sooner, depending on the person. To help you prepare for this, we’ve put together 25 of these perimenopause symptoms, indicators from your body that things are changing.

More Reading: 10 Best Menopause Supplements That Will Give Your Symptoms Relief

1. Change in Your Usual Menstrual Cycle

One of the first things that women tend to notice in the lead up to menopause is that their menstrual cycle changes. Your cycles might get closer together, or further apart. They may also be much heavier, or much lighter than you usually experience.

If you haven’t been doing so already, track your cycle to monitor changes.

Menstrual flooding is the name for a situation when you experience rapid onset menses, a worrying time for women unfamiliar with the condition. It is also the name given to the situation when your menses appear to be over but then continues heavily for several more days. In both cases, it is experienced by perimenopausal women.

Headaches and even migraines are a symptom that many women experience during the perimenopause time. These headaches are often felt just before, just after, or in the middle of their period and can hinder everyday activities.

A surprising symptom, but still one that many women encounter. Women in perimenopause may find themselves feeling less coordinated and graceful, or even more awkward and can find themselves either tripping over more or dropping things more often.

Both lethargy, a persistent feeling of sluggishness, and fatigue, which is often crushing and can grip women very suddenly, can be experienced during perimenopause.

Difficulty falling asleep and staying asleep, regardless of how tired you might actually feel, are not uncommon for women during perimenopause. Women may also experience persistent night sweats, particularly between the breasts, which can in turn lead to chills.

If you’re a lady in your 30s or 40s and you’re having consistent issues with muscle cramping without any explanation, menopause could be behind it. Muscle cramps anywhere in the body might be an indicator of poor diet, but low progesterone can also be to blame.

Women often experience pain in their lower back before or during their period, but when hormones remain at low levels as they do in perimenopause, this pain can be consistent.

There are a few urinary issues associated with perimenopause. The first is more frequent urination, despite not having increased water intake. The second is a sudden and uncontrollable loss of urine beyond a woman’s control. It’s not pretty, but during perimenopause, it can be spontaneous, not just because of coughing, sneezing or jumping.

Women in perimenopause can experience and suffer intense cravings for sweet or salty foods, as well as marked changes in their appetites. They may feel increasingly hungry in the evenings, despite having eaten dinner, or may experience blood sugar crashes that lead to food binging.

As well as muscle cramps, women in the midst of perimenopause can also experience general muscle and joint pain. Many describe it as a general ache, but it can develop into actual carpal tunnel syndrome or cause panic, thanks to the symptom being common in other diseases. If you’re concerned, get it checked.

Genetically, some women do have more of a predisposition to dark circles under the eyes, regardless of the actual number of hours they might have slept. However, even women who have not previously had issues with dark circles may find them popping up more often during perimenopause.

There are a lot of hormonal changes going on during perimenopause, and those can cause a number of changes in hair growth. This might show on some women in hair loss around the body, while others may experience unusual hair growth in areas it has not been present before.

Most women notice hair thinning at the front of their hair when they look in the mirror.

Perimenopause symptoms are not always fun, even if they do hark back to a woman’s youth. For example, some women find themselves experiencing a greater rate of acne, which again is due to the changing hormones the body goes through at this time.

Women complain in their age that their breasts are not as full as they were, and it seems that menopause might be the cause. Even during perimenopause, women can experience a loss of breast tissue, which is sometimes accompanied by breast sagging.

16. Tender or Sore Breasts and Nipples

Along with a reduction in breast tissue, some women may experience pain in their breasts and nipples. This pain is not so dissimilar from the pain that often occurs prior to a period, and may be accompanied by engorgement.

Hot flushes are one menopause symptom that most women are aware of. But did you know that many women also experience very cold extremities despite undergoing hot flushes? It can be a strange combination to get used to.

As hormones deplete in the body, women often find that their sex drive reaches a low point where they have little sexual energy. In some women, this is so strong that it’s almost an aversion to sex.

That loss of libido is not that surprising, though, when you consider that another common perimenopause symptom is painful sex due to vaginal dryness and irritation following sex.

Ringing in the ears, sometimes called Tinnitus, has been experienced by some women during their perimenopause. The ringing can also be accompanied by a whooshing sound or a buzzing sound with an unusual sensation in the ear.

Feeling dizzy or lightheaded is a common complaint in women as they move through perimenopause. This is often felt in conjunction with a loss of physical balance and a wobbly walk that can leave women suffering from fainting spells and vertigo.

Unfortunately, for women struggling to stay fit as they age, perimenopause can put up some roadblocks. When a woman hits perimenopause, she often experiences fat settling in the waist, buttock and thighs, creating a thickening of the mid-section common in older women.

Fluid retention, or edema, is also a concern of women in perimenopause. Women may find they have more issues with fluid retention in their legs and ankles, as well as bloating that is not solved by sleep or urination.

During perimenopause, women may experience intermittent gastrointestinal issues, including both diarrhoea and constipation, thanks to those declining hormone levels. Lower levels of certain hormones increase the demand on liver function and change intestinal motility.

Perhaps one of the most unusual, yet still reported, symptoms of perimenopause is a change in body odour. Women may feel that their body, particularly the groin area, begins to smell differently, which can be off-putting.

Always remember, if you’re worried about something that’s changed in your body, even if you are at the right age for perimenopause, don’t ignore it.

Check with your health practitioner to make sure that it’s not something more serious than a natural change. WTF Eyebrows That Went Too… 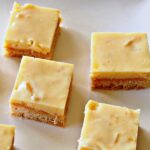